Few sights are as awesome or a sound as deafening as water thundering down the 56-m Augrabies Waterfall when the Orange River is in full flood. The Khoi people called it ‘Aukoerebis’, or place of Great Noise, as this powerful flow of water is unleashed from rocky surroundings characterized by the 18-km abyss of the Orange River Gorge. Picturesque names such as Moon Rock, Ararat and Echo Corner are descriptive of this rocky region.

Klipspringer and kokerboom (quiver trees) stand in stark silhouette against the African sky, silent sentinels in a strangely unique environment where only those that are able to adapt ultimately survive. The 55 383 hectares on both the northern and southern sides of the Orange River provide sanctuary to a diversity of species, from the very smallest succulents, birds and reptiles to springbok, gemsbok and giraffe.

Areas of special interest include:

The Falls: As the Orange River approaches Augrabies Falls it divides itself into numerous channels before cascading down the 56 meter high waterfall. The river then continues its path through an 18 kilometer gorge. The sight and sound of the power of the water will not be easily forgotten.

Moon Rock: A massive exfoliation dome or “whaleback” which is a prominent landmark of Augrabies Falls. Walking to the summit will give one of the best views of the park and its surroundings.

Swart Rante: These foreboding black hills are another distinct landmark in Augrabies. Quartz-poor, these igneous rocks seem to form a natural border between the harsh environment of the gorge area and a more fertile area on the other side. The contrast between the two landscapes can best be seen from the top of Swart Rante.

Oranjekom & Ararat: These viewpoints give visitors the best opportunity to observe the massive gorge area as well as the wildlife that makes it their home. Essential to spot are the nesting Verreaux’s (Black) Eagles, which prey on the abundant rock hyrax populations, as well as the Cape clawless otter which are sometimes seen below in the river in the morning or late afternoon.

Echo Corner: The furthest view point from the Rest Camp, the road to Echo Corner takes you through some of the park’s most stunning scenery. As the name implies a long-lasting echo can be produced. This is also the starting point for the Gariep 3-In-1 Adventure. 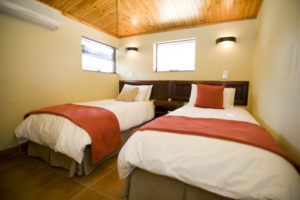