Conjure up a desolate and forbidding landscape, seemingly devoid of life, except for some people dotting along the horizon. Make a startling discovery upon closer inspection when the mirage dissolves into the human-like half-mens (half person) and the harsh environment prove to be a treasure-chest containing the world’s richest desert flora. Miniature rock gardens, perfectly designed by nature, cling precariously to cliff faces. Tiny succulents, mere pinpoints against a backdrop of surreal rock formations, revel in the moisture brought by the early morning fog rolling in from the cold Atlantic Ocean.

Rugged kloofs, high mountains and dramatic landscapes that sweep away inland from the Orange River divulge the fact that you are now in the vast mountain desert that is the |Ai-|Ais/Richtersveld National Park, an area managed jointly by the local Nama people and the South African National Parks. This is a harsh and unpredictable land where water is scarce and life-sustaining moisture comes in the form of early morning fog – called ‘Ihuries’ or ‘Malmokkies’ by the local people – which rolls in from the cold waters of the Atlantic Ocean, sustaining a remarkable range of small reptiles, birds and mammals. A staggering assortment of plant life, some species occurring nowhere else, is to be found here, with gnarled quiver trees, tall aloes and quaint ‘half-mens’ keeping vigil over this inscrutable landscape.

The park is only accessible by means of a 4×4 vehicle, but vehicles with high clearances such as combi’s and LDV’s do travel in the park. Sedan vehicles are not permitted. There is no specific route that can be booked in advance. 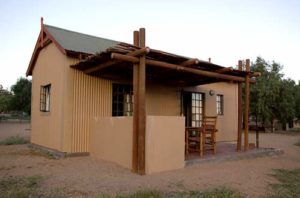